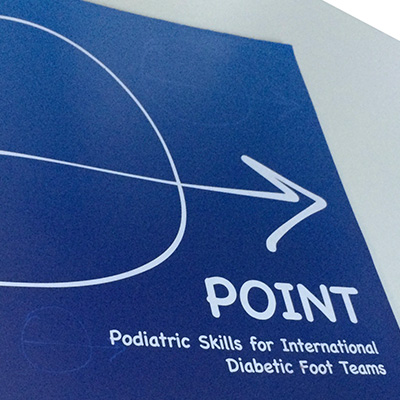 The POINT Project is an initiative between the two organisations: D-Foot International and the International Federation of Podiatrists (FIP-IFP). It is an exciting and potentially far-reaching and milestone move towards promoting the competency-based training for podiatric care in people with diabetes across Europe and worldwide.

The POINT document is a multidisciplinary consensus. It identifies the skills needed to provide podiatric skills across four levels irrespective of the presence of podiatrists.

The POINT Project is an initiative between the two organisations: D-Foot International and the International Federation of Podiatrists (FIP-IFP). Both organisations promote the role of evidence-based foot care for patients with and at risk of diabetes. This collaborative work highlights the podiatric skills needed in order to deliver comprehensive evidence-based care to patients with diabetic foot disease.

The statements along with the relevant skills and behaviours are based upon the guidance documents produced by the International Working Group on the Diabetic Foot (IWGDF), thus meaning while this is a consensus document it is also evidence-based.

Representatives from both organisations with a multidisciplinary membership met early in 2017 to discuss the different areas of practice and to define which skills and behaviours were required at different levels of practice. Using the TRIEpodD-document (UK) and IWGDF guidance as the basis for discussion, the team identified which knowledge, skills and behaviours could be considered podiatric in nature. Once identified as podiatric, we discussed at which level of podiatric practice they could apply.

The members of the team came from a variety of locations which represented practice at the different levels. Following the initial meeting, further discussions took place via email in order to consolidate initial discussions and complete the document. Cognisant of the large volume of guidance in relation to all areas of practice, this document is aimed to assist clinicians by pointing them in the direction in which they need to develop services rather than being a set of rules which must be followed.

The development of this document is merely the first step to identifying areas where skills need to be developed. Both D-Foot and FIP-IFP are committed to developing podiatric skills further across the globe. The aims and objectives of the two organisations are mutually beneficial to those suffering from diabetic foot disease.

People with diabetes deserve the best care that they can receive, irrespective of the resources available. By working together we have been able to identify the podiatric knowledge, skills and behaviours required to provide evidence-based care. The next step is to work together to ensure consistent delivery of these globally for the benefit of those suffering the debilitating consequences of diabetic foot disease.